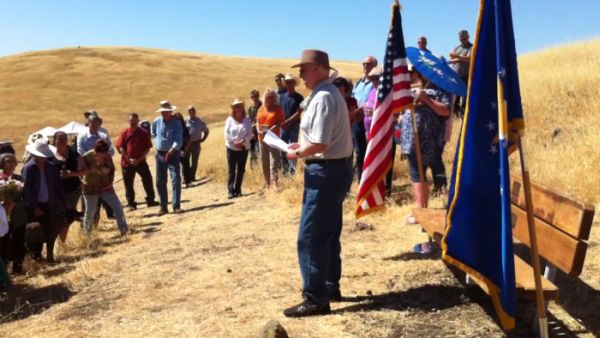 BY LORI A. CARTER

George Burk remembers it all. The window glass cracking mid-air on his Air Force Convair T-29 transport plane. The crash. The sounds. The smells. The pain. The white-hot, searing pain.

The retired Air Force captain was one of four crew members and 10 passengers on the flight dubbed Visco 57, leaving Hamilton Air Force Base in Marin County en route to Spokane, Wash., at 8 a.m. on a hazy but otherwise clear morning.

Just minutes after takeoff, it clipped a ridge southeast of Petaluma, crashed and caught fire, killing 13 of those on board.

Burk was the sole survivor, rescued by a Mangels Ranch foreman who happened to be driving a different route that day and saw the smoke coming from a small valley.

Scarred by burns over most of his body and left with jarringly tragic mental images, Burk has turned the catastrophe into strength and positivity. Now a motivational speaker and author, he turns 73 next month.

Wednesday, Burk and dozens of family members of those who died in the crash returned to the secluded, rolling hills to honor their loved ones.

Widows and children of the men killed gathered together Wednesday, some having come halfway around the world for the occasion. An Air Force color guard raised the American flag.

They stood solemnly, surrounded by dry grass and prickly thistles overlooking a stand of eucalyptus trees where pieces of the plane's fuselage still rest hidden and undisturbed.

Broken trees stand frozen in jagged poses from where the plane sheared them off 44 years ago.

Emotions were difficult to grasp.

"I feel really peaceful to be here," said Candace Shelton, whose father, co-pilot Col. E.G. Shelton Jr., died in the crash. "Even though tragedy brought all these wonderful people together, I'm really proud."

"It feels kind of like a homecoming," said her sister, Suzie Shelton, who lives in Santa Rosa. "This group shows what wonderful men our fathers and husbands were. They left wonderful legacies."

Burk dedicated a memorial bench that overlooks the crash site where so many of his buddies perished. Plaques identify them, as well as John Davieau, the foreman who saved Burk's life.

"I hope I can hold it together," Burk said before he walked toward the wooden slat bench.

"I want to acknowledge the heroes on that plaque," he said, listing them by rank, name and nickname, drawing knowing smiles from those watching.

Wonder, sadness, a sense of catharsis  Daryl Robinson of Iowa City said he felt a swirl of those emotions standing in the place where his father, Air Force Maj. Robert L. Robinson, the pilot, died. Daryl Robinson was 9 years old at the time and living on the Novato air base.

"Fourteen families are involved in this," he said. "It's so nice to have this connection."

Two years ago, Burk and a couple of buddies from San Francisco took a trip north to try to find the crash site. They did, but were blocked by a gate. Through a series of phone calls and cooperative land owners, they were allowed to poke around.

The land was owned by the Roche wine family and has since been sold to the Sonoma Land Trust. The plan is for it to ultimately come under the jurisdiction of the Sonoma County Open Space District.

Tolay Lake Regional Park officials helped coordinate the installation of the bench, which was funded by Burk and the family members. The family of Technical Sgt. Enrique R. Ferrer helped organize the survivors.

The children of Master Sgt. Robert P. "Bob" Prince flew from New Zealand and England for the event.

"We were always curious," said his son, Ed Prince, now of Raglan, New Zealand. "We went back to the U.K. and didn't know much about the accident. As we got older, we found more on the Internet and in papers.

"It's very emotional," he said. "We've seen photos, but to actually see the place. ... It's a nice place to be remembered."

His sister, Charlotte Chapman of Cornwall, England, struggled with her fear of flying to come to the dedication. She finally committed last week.

"The reason behind it was bigger than the fear," she said.

Burk knows fear. He lived it during the crash and in his painful, lengthy recovery.

He suffered severe burns over 65 percent of his body and multiple internal injuries. Not expected to survive beyond a few weeks, he spent three months in intensive care and 18 months in the hospital.

"I vividly remember the sound. It was like when you blow air into a balloon," Burk said of the first moments the plane began cracking up.

Outside the plane window, he saw flames licking over and under the engine.

"The noise was deafening," he said. "The canopy peeled back."

The crew knew they were in dire trouble.

Burk heard his friend, Master Sgt. Fred Adams, say "We're not going to make it," and he sat down and buckled his seat belt.

Burk said his last conscious thoughts were whether his insurance policies were up to date: "My kids were 6, 4 and 2 years old."

Then, the impact. He was thrown violently back and forth, breaking his nose.

"I felt searing pain," he said. "It felt like someone was throwing large buckets of scalding water on me."

He said he blacked out and awoke some time later face down, 35 yards from the burning wreckage. Davieau helped put out flames ravaging Burk's body.

"I was coming over the hill checking the cattle when I saw all the smoke," Davieau was quoted at the time. "I ran back home and called the fire department and then went back to the scene."

A piece of the fuselage about eight feet long and one of the plane's two engines were the largest remaining pieces of wreckage. The rest was smashed to pieces and scattered over the barren hills, the reports said.

"It was surreal. This was happening to someone else," he said.

Burk was medically retired from the Air Force in 1971. He published his first book, "The Bridge Never Crossed: A Survivor's Search for Meaning," in 1998 and has since written three others on love, survival and triumph.

On Wednesday, someone thanked him for organizing the emotional return. He turned it back on them.